About this section:
I made this section to share some electronics projects. I’m primarily a hobbyist in this field, although I often find use for these skills in my line of work as well.

Disclaimer:
I have no relevant education, and have learned electronics mostly by trial and error. These mods and projects have worked well for me, but copying my work is at your own risk. I do not guarantee for any of the information on this site to be correct or safe to implement.
Power supplies, amplifiers and other electrical equipment can kill you, even when not plugged in. Read up on the relevant safety precautions and be careful.

I've had some issues with my Porsche 944 sunroof. Clarks Garage has good instructions for the mechanical issues, but at the electrical side it falls short. I'm posting my findings so far:

Please go through the guide in Clarks Garage FIRST. I'm not covering any of the areas that he already covered.

bench-testing the relay:
In this case I'll refer to the numbers printed on the relay itself.

I believe adding 12V to pin 1 or A should give +12V at pin9, but I'm not sure of wether it should affect (remove) any voltage to pin 8 or 2. I believe what this does is tell the motor to lock the sun roof in place if the car is moving or is locked. I'll update this when/if I figure out mine.

About the different models:
The Peavey 5150 should need no introduction.

The 5150II is a 5150 with an improved clean channel, and a modified distortion channel. It also has a different power supply and a few changes in the power section. You can't make a 5150 sound like a 5150II or vice versa without severe modification, but you can get them a bit closer by some simple mods.

Mod the 5150/6505 lead channel to match the specs of the 5150II/6505+ You will get a more twangy top end, more fizz, not as much of a raw growl to it, and a more processed feel/sound overall. If this is what you want, do the opposite of what's stated above.

6505+ 112:
it is possible. I recently got an email from a man called Brian Mangan, saying that you can adjust the bias of this amplifier by altering the value of R14. I have not taken the time to check the schematic or try it myself yet.

Other preamp mods:
I found these mods in the Rig-Talk forum, and they were originally posted by Mark Cameron. They are designed for the original 5150, and may or may not work well with the 5150II or combo versions:

V5B(middle preamp tube): add 10pf silver mica cap to pins 7 and 8. This will remove hiss, make the gain less fizzy, make the high mids clearer and improve clarity in chords. between pins 6 and 7 it's even more efficient, but will also darken the amp a lot.

C26: cut one leg for less bottom end on the rhythm channel

I tried tinkering with R15 and using Marshall values, but it took too much away from the original sound. The 39k is the SLO value as well.

Power amp mods: replace screen resistors (with 1k 5W) add choke somewhere. I have to study these further. To be continued.

Credits: I didn't figure all of this out by myself. I've gathered some of this information from forum threads, and here are some of the sources:
http://www.mrbobo.com/music_5150_mods.htm (5150 bias mod and tone stack mod1) http://www.ultimatemetal.com/forum/backline/596150-5150-mod-thread.html (EQ mod 2 + etc) combo has a preamp nearly identical to the 5150II, but a different fx loop and power amp.
20 comments

Like most consumer electronics, computers tend to break down due to low quality capacitors that fail before their time.  In this example, my brother's computer switched itself off after a period of instability, and would not turn on again. 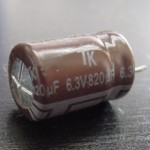 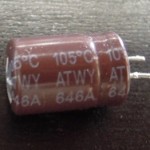 As you can tell from the pictures, the part is:
Manufactured by TK, max voltage 6.3V, capacitance 820uF, max operating temperature is 105 degrees Celsius, and it's from the ATWY series. 646A is a date code.

In most electronics repair situations you'd simply replace the broken capacitor with a new one of equal capacitance and the same or higher voltage rating. This part measured an ESR of less than 1.1 ohms, which for most circuits would indicate a healthy component. In modern computers however, specs are much tighter, and parts that would work perfectly in most circuits can make a computer fail.

A google search for "TK ATWY" led me to the data sheet, which revealed that this 6.3V, 820uF capacitor has an Impedance (other word for ESR) of 0.036ohms, and a max ripple current of 1140mA.

We're looking for a part with the following specs:
Capacitance: 820uF (this value must be identical to original part)
Voltage: 6.3V (this value can be equal or higher)
Temperature: 105C (look at the placement of the part; how hot will it get in that position? In this case, very close to the South Bridge; 105C or more is recommended)
Impedance/ESR: 0.036 ohms (this value must be equal or lower, but not too much lower)
Max Ripple current:  1140mA (this value can be equal or higher)
Physical dimmensions: Diameter: 8mm (just make sure the part you order will fit on the board)

After a repair like this it's probably a good idea to clear CMOS+RTC, just in case something got corrupted when the computer became unstable.

To get the same performance on all tracks I prerecorded a clip of dry guitar, and fed that to the rock master using a reamp box.

In my opinion, the differences between the tubes are negliable. It was however possible to reveal some difference by comparing two out of phase samples.